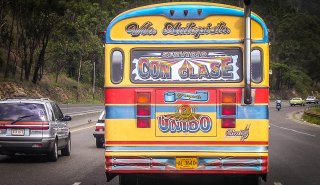 Venezuela has several airlines and a reasonable route network . Maiquetia Airport in Caracas where is is the main aviation hub in the country, and operates flights to most other Venezuelan airports. The localities connected with more flights from Caracas are Porlamar , Maracaibo and Puerto Ordaz ( officially known as Ciudad Guayana ) . The most popular destinations among travelers are El Vigia , Ciudad BolûÙvar , Canaima , Porlamar and Los Roques. There is a departure tax of 53.50 VEF for international flights from Maiquetia , which is normally included in the ticket and is charged only on flights to Los Roques.

Canaima and Los Roques have their own fleet of Cessna aircraft and other planes flying for a number of smaller airlines . These flights should book at a travel agency .

In Venezuela there are several islands , but only Margaret Island is accessible by boats and regular ferries .

The Orinoco River is the main watercourse of the country. The river is navigable from its mouth to Puerto Ayacucho, with regular service but limited passengers.

As there are no passenger trains in Venezuela (although one is under construction) , almost all trips are made by bus. The buses are usually faster and run regularly , night and day between the main towns , is an inexpensive and efficient transport normally . It is recommended to travel at night between distant cities , because you will reduce hosting costs and apply make long distances , which could be more tedious during the day. The most important recommendation is to be prepared for the cold that makes inside the buses , the temperature can drop to 13 ô¯ C

Vehicles can be from petardeantes pots to the most recent models. All the major companies offer executive service in comfortable buses (often chilly ) air conditioning , covering all major long distance routes and are the main means of transportation between cities .

Caracas is national transportation hub , with buses to all corners of the country. In general , it is not necessary to buy tickets for the main routes to a couple of hours before leaving , except in the festivities.

Many regional short-haul routes operated " by position " , a system that is between the bus and the taxi. The " for positions " are often large and old cars , American-made (sometimes they are minibuses ) , which run fixed routes and leave when full . They cost 40-80% more than the buses but are faster and often more frequent.

We must always travel with a passport in hand, warm clothing in air-conditioned buses and earplugs in smaller buses, almost always with music blaring , as a security measure , some bus companies long distance record at save passengers before leaving.

Car travel can be a comfortable way to travel . The country is reasonably safe , and the road network is extensive and almost always in good condition. Plenty of gas stations and fuel is the cheapest in the world can fill up almost one euro . This rosy picture is somewhat obscured by the Venezuelan traffic and the behavior of local drivers. Traffic , especially in Caracas, ranging from glacial and chaotic.

Few arrive in your own car to Venezuela (or South America in general) because it is expensive , and complicated paperwork involves a great waste of time. It is much more convenient and cheaper to rent a vehicle on the ground.

All major cities and towns have their own urban transportation system , which usually consists of small buses or minibuses. Depending on the region , they can be called vans , trucks, trolleys, buses and trucks , and typically cost no more than 2 VEF . In many large urban cities also " for positions " that bypass the chaotic traffic faster than buses. Caracas has an extensive underground network, Maracaibo and Valencia and other smaller dimension.

Taxis are fairly cheap and recommended , especially for transport between bus stations and urban centers if the traveler carries all your luggage . There are metered , so you should always agree the price with the driver before boarding the vehicle . It previously read about the current rates by asking some independent source, such as staff bus station or hotel reception .